Isn’t it interesting how we all want to be successful, but when the opportunity comes, many of us shy away? Mentally, we tell ourselves we can’t do something, while conflicting pressures from others make it easy to give up. What were once perceptions about fear can quickly become reality. So, see if any of the following reasons keep you from pursuing your dreams and facing them head-on. When you do, you’ll realize that you were stronger than you ever believed.

Source: 5 Fears You Might Not Realize Are Holding You Back (And What To Do)

Some are likely to read the article and think it’s another way of saying “Oh, I’m doing better now, time for new, upper class friends. All the other losers I hang with should be dumped immediately!”  There’s a difference between a social climber, and listening to sabotage/sour grapes.

After breaking a collarbone, it was almost 3 months before I could get back into the pool.  Even then, it was more than a month of experiencing pain/discomfort besides seeing how much strength/stamina/ability I’d lost because of being immobile for 3 months.  I was asked to move up lane, because I was starting to lap people in the current one.  The following swim, I was made told that I thought I was fast…  I’ve had similar experiences with cycling.

It stands to reason that improvement could lead to distance because you can no longer keep in contact with people you previously did.  You can’t talk about the same things.  From my experience, I think the issue stems from the relationship not actually being what I thought it was.  I’ve read about “diet sabotage” and such, but I think it was always there – people just weren’t as forthright about it.

The implications go far beyond being scared of a needle prick: Not only do some adults avoid healthcare due to their fear of needles, but research indicates that poorly managed pain in early childhood can change how people feel pain, and may even make them more vulnerable to it later on.

The good news is that, with a few simple strategies, parents can ease their child’s fears, help manage the pain, and reduce the risk of their child developing a phobia.

Source: How to Help Kids Overcome the Fear of Needles

I didn’t like needles when I had my first DVT & Pulmonary Embolism (PE), but weekly testing made short work of that.  After years of blood tests, I’ve come to learn that there are some who are really good at it… and some who are not.  Probably the worst was the one who stuck the needle in, then wiggled it side-to-side in hopes of finding the vein.  The result was probably the worst bruise I’ve seen.  There’s no way to know who is good and who is not – all I can do is know which arm is easier for them to work with.

The next time someone refers to a horror movie as “bloodcurdling,” they might actually be kinda right. A new study shows that the fear experienced when watching scary movies is in fact associated with an increase in clotting agents in the blood.

The fear response includes a big squirt of epinephrine which increases your heart rate and constricts blood vessels so you can run from the bear faster and bleed less when it bites. That your body also dumps clotting factors dovetails with this system nicely. What’s really surprising is that this hadn’t been recognized previously.

But I’d like to see if the findings stand up in a larger sample size.

The US has seen an increasing number of outbreaks from some communicable diseases that can easily be controlled through vaccination, but there has been a parallel increase in the number of parents who are choosing not to vaccinate their children. In part because there are a lot of reasons that the vaccination rate is dropping (unfounded fears about vaccine safety and mistrust of pharmaceutical companies are two), it’s not clear that a single intervention will reverse this trend.

A pair of papers released this week looked at two very different approaches, one focused on individuals and a second at state-level laws. They show that it’s relatively simple to change both attitudes and actions on vaccination.

I’ve always been seriously aggravated by the anti-vaccination groups. This is a classic example of the prisoner’s dilemma or similar game theories. Society as a whole loses out because these people believe bunk science.

Although… to be a prisoner’s dilemma there would technically have to be a winning position gained by not getting vaccinated and a loser’s outcome for getting vaccinated. Since there’s not, I guess these people are just dicks then: 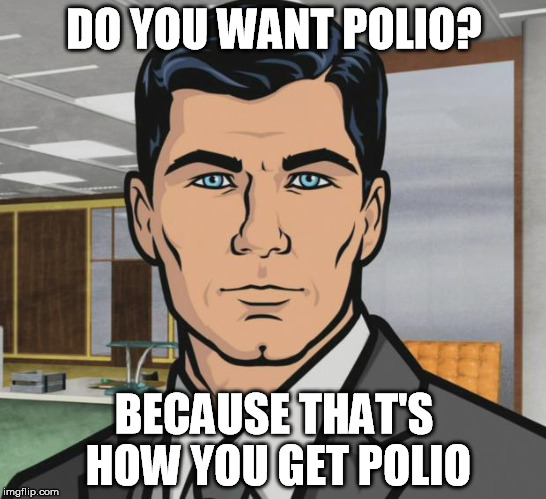 You’re reading it in my voice, aren’t you?

We know human screams are jarring. They’re loud, occasionally shrill, and tend to make us feel stressed, or even fearful. What’s unclear is why they elicit anxiety. But a new study suggests this response may have something to do with the acoustic quality of human screams, and how they trigger the brain’s fear response.

Source: How a Human Scream Uniquely Activates the Fear Response in Your Brain

It’s a sound/frequency we do not experience in normal, everyday settings.

I remember a friend remarking about knowing the difference when her kids would scream, to tell when things were really bad or they were faking.  Another instance I remember was someone telling me about knowing when they were hearing a “death rattle”, in rural areas where a given animal got injured bad enough.  We communicate a lot through sound – say one thing, but our tone infers another.