Your mileage may vary 😉

Try as we might to fight or deny it, old age will impact our running and athletic ability. By age 35, the rates of decline are so predictably linear that this calculator by a Yale economics professor maps out just how slowly you can expect to run the same distance as the years run by.

Source: This Calculator Estimates How Much Slower You’ll Run With Age

Does this mean I’ll go negative?

“Feel the burn!” is an oft-repeated cue to get exercisers to work harder and longer than they normally would. A good many relish in this uncomfortable feeling, but depending on the circumstances, this “burn” isn’t always a reliable indicator of a good or effective workout. Here’s what’s going on and why “feeling the burn” is overrated.

I like this approach because it pushes back against the pressure people feel to exercise a certain way with a certain attitude. I was having a similar conversation last week with a friend who teaches fitness classes. She said, “whatever works for you. whatever makes you happy”.

Technology has always been intimately linked to the human body. From sharpened flint to smartphones, we’ve been carrying our inventions for millennia—but the relationship is about to get even closer. The next generation of electronic devices might not just be near our bodies, they could be powered by them.

Source: Your body, the battery: Powering gadgets from human “biofuel”

Who needs AI to rise up if we’re going to turn ourselves into batteries? 😉

One of my favourite clips from Mass Effect 2:

Cycling Plus magazine spoke to James Hewitt, a sports scientist and performance cycling coach, about how you can use lactic acid to your advantage. Here’s how to push that boundary and more with some expert advice to help you improve…

Source: How to beat the burn while cycling 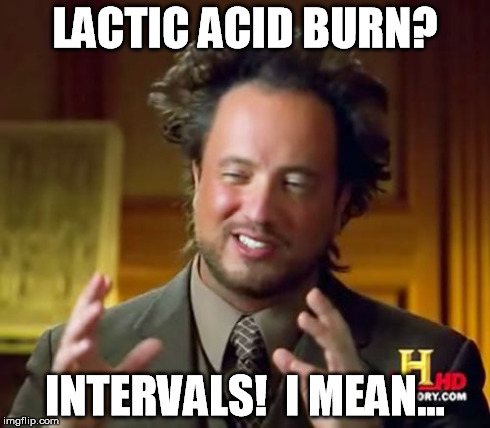 Cheese, once primarily a way to extend the useful life of milk, is today quite a darling in the foodie world. It’s also fertile territory for adventurous eaters, from Stilton flecked with gold to Sardinian casu marzu writhing with live maggots. Some have even made cheeses with the bugs from their armpits and toes.

But you don’t have be a connoisseur to appreciate these living castles of microorganisms. Each one is a house that bacteria and fungi built, and each has its own distinctive architectural style according the tastes of its inhabitants.

Source: The strange world inside cheese

Some people throw multiple puns in a single post. I prefer to finely craft singles.